Posted on January 6, 2016 by Erick Carpenter

Well, another minor adventure in our travels, one of the kind that makes you want to pull your hair out, and slap people viciously…  To explain….

I have wanted a shotgun for home protection for some time. I have always had the opinion that the sound of a round chambering in a twelve gauge is unmistakable. Everyone knows that sound, “CHICK, CHAT”, and if they keep coming in our rig after hearing that? Well, their next step will be their last.

I finally came across a shotgun that fit all our needs, it has a longer barrel than I like, but it would fit the legal needs to go into Canada with it. Longer barrel, pretty much a hunting shotgun at this point. I went to the US embassy site and read up on the legalities of bringing a shotgun across the border, in a few words? Should not be a problem. I mean I sat there and read all the rules and regulations several times over, and based on my interpretation? No problem.

We chose to go through Canada primarily due to the short distance to get from Grand Rapids Michigan to Bangor Maine AND get to see Niagara Falls! woo HOO. Off we go! We arrive at the border crossing early afternoon, we have plenty of time. I have placed the ammo in a drawer that cannot be accessed and put the shotgun (empty) on the bed, and we pull up to the check point. “Passports?” Drivers license? yep yep. “Have anything to declare”? “Yep, a twelve gauge shotgun”. The guys eyes get BIG and he starts to stutter.. “Uh, you got that where exactly”? I reply, “Empty, out on the bed for easy access”. He still has those big doe eyes, “And it’s empty, right”? 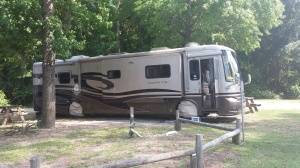 I look at him funny and think what part of “empty” did you not understand boy? But I stay nice and say, “yep, it is empty”. “Do you have any other weapons”? “No” I respond, “I know that handguns are illegal in Canada”. He asks a few more questions then again, “Any other weapons”? “No” I reply while thinking to myself “What part of NO did you NOT understand boy”? But I remain pleasant. He is just doing his job. He sends us over to be inspected, which I knew was coming.

The Canadians had us get out and went into the rig after the shotgun. Meanwhile, two more join the party. The guy with the shotgun asks me if I am going hunting, and that I reply “No, just going to Niagara Falls”… Wrong answer. The cop takes the shotgun and goes inside. Then comes back out and says “Well, we don’t have any rules about just transporting your weapon into Canada, but…” We can’t allow you to take it either”. The question he had was whether I could ship on or just have to turn around at the border, and back in he went.

In the meantime, the dogs board the bus, looking for that elusive Colorado grass that they are SURE we were smuggling across from the US after declaring I had a weapon on board. Yep, I’d be that smart indeed. And of course Lynda has all manner of plants sprouting in the rig.. Looks like a regular green-house and to the untrained eye? Probably all looks a lot like pot. That mind altering plant that does all manner of nasty things to your brain. Just ask the Federal Gummint about that. Anyhow, the dogs go through, the people go through, and close to three hours later? Do we get to go to Canada?

We got sent back to the US… We didn’t do anything illegal but not quite legal either. So much for the US embassy look up that I had spent time on JUST to avoid this problem. We turn in traffic and head back to the USA.

We arrive at the US side, a quarter mile from where we just spent 3 hours having our house torn apart by the polite Canadians. But at least we didn’t have them come out waving my syringes saying “WTF is this?” Instead they looked at the legal drugs and went.. “boooooring”.

As we pulled up to the US side, the guy reacted the same way, the same doe eyes and “You have a shotgun”? Well he spent about 4 minutes putting that into a computer and sending us on to the inspection guard. This guy had us pull up and put our hands on the dash until he could see what we were doing and that we weren’t Haji, of course I SO look like a rag head bent on killing and maiming citizens of the US. He pointed us inside where a very laid back older LT. said “You did what”? and laughed. He responded that sometimes you get through and sometimes not, this must have been a not day.

He got the numbers off the shotgun and checked to make sure it wasn’t stolen. On that note, if the shotgun wasn’t registered to anyone? It is now registered to me due to that neato skeato check. The Lt. held us for a few minutes and eventually sent us on our way. All said and done? about 4 hours of waiting, being searched, and turned around, re-searched, waiting, and going on our way, several HUNDRED miles out of our way just so you know, but no worse for wear. Other than my shortening fuse…

Lesson learned.. no weapons into Canada… and Canada, O’ Canada?

You I will not see.

Igniting Awe in Learning and Leading

The Underwater Adventures of PT Hirschfield (click a story below)