Lynda and I spent the day going from the Table Rock Jungle Lodge to Tikal in Guatemala. This takes a guide from Guatemala, a driver from Belize and a driver from Guatemala.  So to take two tourists from the US to Tikal takes 3 more people.. Unless of course you choose to go at it on your own. And we have met folks who are backpacking their way through Central and South America. Way wilder than we are. But again, I digress.

The ride from San Ignacio was without event, but the rain and the countryside were fabulous. The free roaming dogs and pigs are fun to watch, and a comment was made about them as we drove. The driver did quite the zig-zag around a chicken… I mean a serious “holy shit” move. And then he explained that if you hit a pig or a chicken?

We met our Guatemalan guides at the border, and they all knew each other. Good team to have if you are bouncing through Central America for your first time. And we are as nervous as a long tailed cat in a room full of rockers. I mean when I heard about Guatemala, it was always about corrupt police that would drag you off into the jungle and shoot you, or drug lords lurking at every corner, or something else.

We were commenting on the road to Tikal that for the most part, was paved and in good shape. Our Guatemalan guide explained that in a couple years past, the road was unpaved and took 3-3 ½ hours to travel. Now? Only 2 hours to get through. We came onto a military checkpoint, my hackles rise, Lynda gets a bit closer to me, and guess what? The driver waves, the soldier waves, they smile and we go on.. Slowly learning about paranoid US tourists… us.

The biggest crime in Belize and Guatemala? Human trafficking. Running Chinese from Belize or Guatemala to the US. Or bike theft which is the second largest crime. So drugs are not what the people in the US think, by any means. I find it quite interesting how the media and the government in the US makes so much ado about nothing.

Hugo, our guide, was very informative he talked much about the Mayan culture and its rise and fall. We spent the majority of our time on the road asking questions about the locals, learning about their government and it’s issues, then about the local ecology. Central America is far beyond the US in preserving their ecology. Or at least appear to be. Recycle, use and re-use, some due to the very nature of being a third world country, but also realizing the connection between man and the world… Screw up the world? And you don’t have a chance. However there is still an inordinate amount of garbage all around… not good. 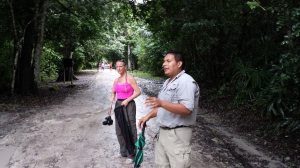 There is a large lake the guides take us by, and I have long since given up the ability to pronounce it, that the locals use quite a bit, including laundry places where the ladies will spend the day washing clothes for the family. I mean standing waist deep in the water with shelving all around and mashing, squeezing, thrashing and rinsing the laundry. This same lake, every 3 months or so, gives off a sulfur purge that the locals say smells quite bad.

My theory is that it is on a volcanic vent that “belches” every so often and creates the smell. It may also be that the bottom of the lake has a methane deposit that releases periodically as well. It would be an interesting study. We were also shown how some villagers are using old plastic bottles and concrete to build walls in their homes and insulate against the cold here. (Cold being a very relative thing) but the plastic bottles that reduce the amount of concrete used, keep insulation value, and actually provide light into the house versus using costly windows. Clever people here in Central America.

The trip also had a stop at a local shopping store that donates an amount of purchases to local charities; thereby the entire tourist guides tend to stop there. The food is good, the pico-de-gallo is HOT, habanero hot, but enjoyable. The final stop in Tikal at the actual site is well maintained and for us, fairly slow tourist wise. Our guide, Hugo, was again very informative about the site, and was able to show us highlights that if we had been on our own, would likely have missed. Hugo also told us where to get the best angles for photos at, and what we were photographing and the history behind each area. We took off around the central Mayan ruins area, peeking in on areas that while have been seen by many, gave us a rough glimpse into the past of the location and its people. I will say that looking around and the locals had performed realizing that the local community was about 128,000 people, a LOT of work.

Then the realization hit that they had zero machinery, and it was all done by hand and by animals. They flattened large areas for building their temples and astrological viewpoints from, knew enough about stars to align the buildings perfectly, and were able to raise these buildings without help of any mechanical assistance.

And to both of us who had seen pictures of these ruins in our books in school? Even more astounding was that two kids from Roswell had made it here to see this human accomplishment. I think this was a surprising discovery that somehow, two kids from a pretty humble start in life had found their way to Guatemala and were standing in some ruins dating back to 700AD. Not a bad start for a road trip for a lifetime.

When we finally finished the tour of the Tikal site, we returned to the Table Rock Jungle Lodge with little or no issue, muddy, tired and very happy. We spent the evening talking to travelers, who were staying here, and wild tales were shared, contact information swapped, and tired eyes took us to bed. Then Lynda had a surprise visitor. Something she ate caused a blockage in her intestine, which catapulted us, right back into the wide world of cancer.

Lynda and I had hoped that those days were behind us, that the days of swollen intestines closing off food processing were over. And apparently they are not. The larger issue with this problem is that there is not a lot of medical help available here, so Lynda, being the incredibly “insightful” person she is, made it a point to bring pain killers and stool softeners on the trip. After about 2 hours of intense pain and discomfort, the blockage either broke down and passed or came up, or both. Welcome to the roller coaster from hell. One-minute life is good, and in a split second it can be questioned how much you have left.

Now, instead of freaking out and collapsing into a bowl of emotional jelly, which was my gut reaction, we have both determined that path is not for us. While quite scary and disconcerting there is another angle to look at this incident. The angle we take is a way to make something positive out of something that is as spooky as it gets.

Getting the shit scared out of you reminds you how tenuous your hold on life can be, and that in a moment, your life can be wrested away from any plans you may have had. So we live in the moment, with these reminders to do just that. Planning ahead is fine, but make the plan for the immediate future your priority, your drive.

Life is a short run thing, no matter how long you have. And with that, make the most of what you have while you have it… Surprises, both good and bad come your way every day. So make the best of every moment you have. This is how “cancer” or “can-serve” affects our lives. We make it a better life by the drive this disease gives us.

On that note, we have begun building our bucket lists again, working on which adventure should be next, and in that, we have had shifts in our comfort zones, at least I certainly have. Earlier I had said the couple that were backpacking through central America and south America were wilder than us? Maybe not anymore. Although we are not likely to grab a pack and give central America a go, we are not against it either.

The Underwater Adventures of PT Hirschfield (click a story below)

Meditations on Philosophy, Strategy, and Life